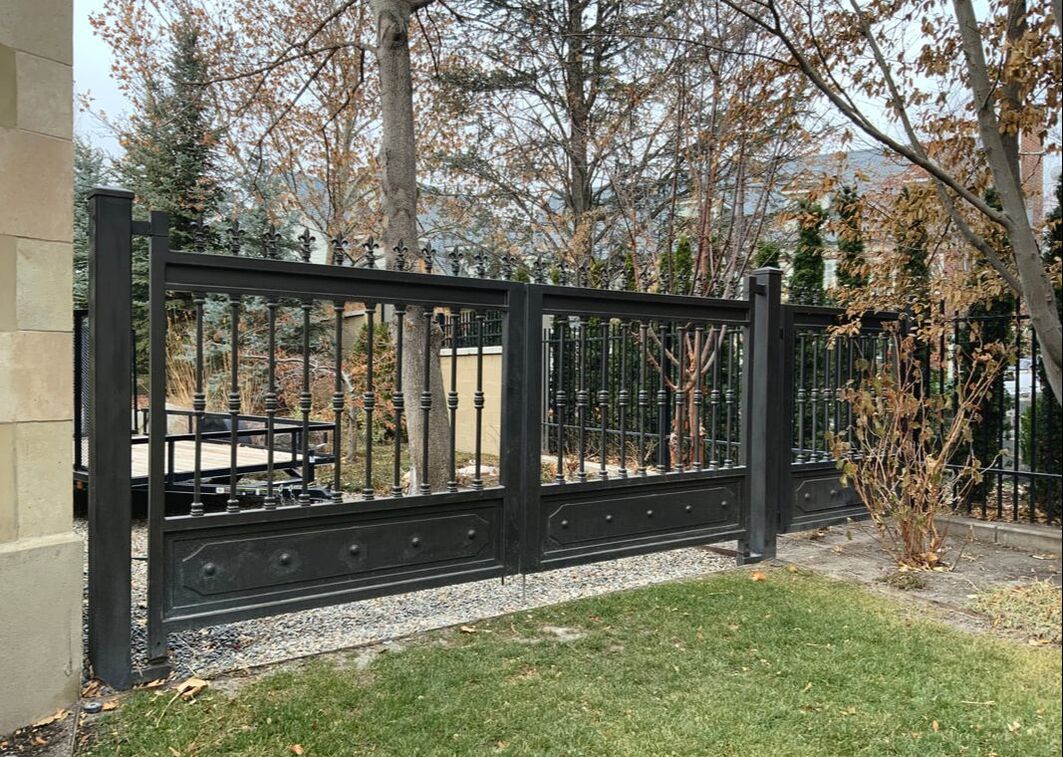 ​We feel obligated to share with you these authentically designed gates located in Holladay, UT. The client had an idea to design rectangular shape iron gates. The goal was to follow straight lines of the neighboring iron fence, and, also, the customer wanted to match the style of an existing home. Our designer came up with multiple wrought iron gate options - most of them were highly decorated and ornamental. The client asked to simplify them, keeping the ornamental and luxurious one for the main entrance.
These iron gates are visually massive at the bottom. This mass ad the effect of weightiness and implies security. The decorative elements on the bars and top of the gates are cast iron. We offer a variety of these details to choose from, and you can always use our blacksmith in case some particular elements have to be custom forged. The half-spheres on the bottom plate and decorative panels with radial corners unify the overall style. The big distance between the ground and bottom of the gates is to assure that snowy day would not block the excess. We were happy to be in service to such bright and exceptionally loyal people. We will be delighted to provide more metal fabrication services to these wonderful clients.
Elegant lines and unique forms of this wrought iron railing, built for a custom home in park city, became an exclusive decoration for the delicately shaped stairwell. The main idea was to attach the railings avoiding any connection screws being visible. The custom convex covers with square openings cover the bottom connection plate of the textural bar. In this way, baluster attachment detail appeared clear of any fasteners. The bent bottom shape of the picket was an architect's idea. Such design unifies steps and railing that elegantly wraps the treads of the stairwell. By implementing this visual touch the staircase appears as a more pleasing and orderly harmonized unit.
The complexity of this project was to avoid any inside welding. By the time, we as metal fabricators, were able to start our installation part, all the interior was on its last stage of completion. As a result, we had to make pins that would support the straight balusters and go directly into the thread. We fabricated the iron pins where half of each had a screw thread; the other half was sticking out three inches above the step. Later on, a baluster has been placed on top of it using a metal adhesive, and in addition, a small hidden screw was attached from the side to keep it more sturdy.
It was a three-story house, therefore the stairwell was terrifically large. It certainly has taken a tremendous scope of persistence and effort, however, we are exclusively happy that the contractor believed in our abilities, as a metal fabrication and blacksmithing company, to deliver the desired outcome. 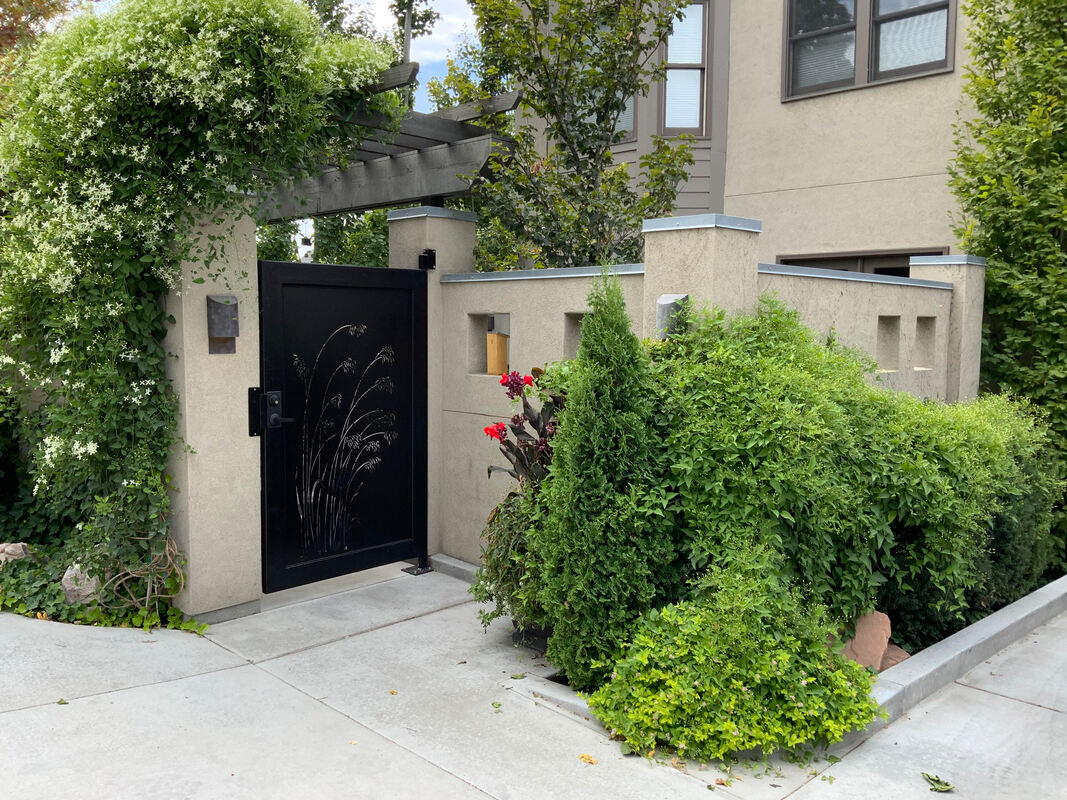 ​     These modern iron gates, you can see in the picture, were built for the landscape architect. It is always a joy to work alongside such exceptionally talented and highly imaginative people. We are always happy to gain more knowledge and exchange ideas.
This overall part is a backyard entrance for the architect's residence. The idea was to aesthetically finish the backyard with a gate that would have a nature theme. The beautiful flower drawing was digitalized and provided to us by the architect. Very often, we have clients with amazing pictures they would like to incorporate in the design. And, yes, a simple drawing might have a crucial effect on the final design appearance. This gate is a confident prove of aesthetical enhancement using the impressive art and simple laser-cut process.
We like to mention the pin hinge method we prefer to use for all our gates. There are many benefits this technique carries. The idea is to keep the gate weight directed on the ground instead of the supporting post. This way post does not hold the entire weight but only prevents the gate from leaning. Such distribution of force extends hinges longevity and requires less frequent maintenance.
This modern iron gate was a joyful project where we were lucky to consolidate our metal fabrication skills with the architect's imagination.

The lady we built these custom exterior iron railing has a profound taste in aesthetics. Since we have designed and built the wrought iron fireplace screens for her, she had become our regular client. She is always happy to give us more projects to beautify her already exceptional home located in a pretty area - avenues, Salt Lake City. And on our part, it is a delight to do the work for such a remarkable woman.
These iron railings are a replacement for the old ones that have been destroyed by the fallen tree. In terms of composition, while the design phase, we decide to solidify and, in some way, visually ground it with the four-inch plate underneath the grabrail. This design method makes the top heavier, which, as a result, similar to the crown, enriches the overall appearance. The c-channel was placed under the bar and repetitively riveted in line with decorative flowers. The idea was to create a monotonous baluster pattern that won't appear overloaded and busy. We wanted to accentuate the lightness and see-through ability to unify the surroundings and not overaccentuate the new iron railings. Moreover, as you can see in the picture, the brown-bronze color was highlighted using golden patina. It is a simple but highly effective visual effect that allowed all the convex forms to appear closer, and all the deepnesses optically fade into the background.
We are blessed to have such a highly open-minded and original customer. It is indescribably meaningful for us, how by being our regular client, she expresses her appreciation for our work. 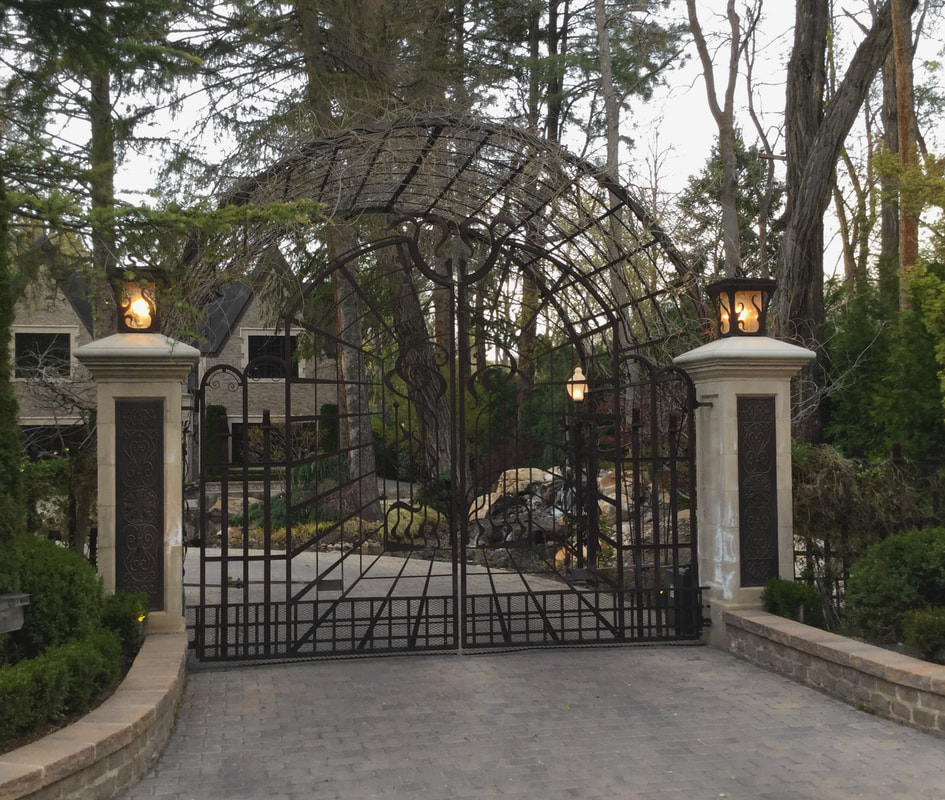 ​     Entry gates are the visual portfolio for any house. The entrance always says a lot about the owner's aesthetics and often defines the viewer's impression. These ornamental custom wrought iron gates look invitational and have become a reason we, as a metal company, have been positively referred and given more business.
The iron grid arch above the gate has a tunnel-like form. In this way, the architect wanted the entrance to appear encouraging and welcoming. Instead of just dividing the property line with a singular gate, a beautiful green arch was extended above. While designing this wrought iron gate, it was important not to break it into many elements and not over-solidify it with dense metal sheets. To our mind, the architect has done excellent work. The clients did not want the gate to appear defensive, but opposite, transparent and greeting. Another visual enhancement to notice is the center of the iron gates. It repeats the overall shape outlined by columns and an arched top. Perspective-alike lines optically take us into the garden.  In addition, the grid patterns remind us about the main purpose of the iron gates which is to guard the property.
The metal decorative plates installed on the columns and the custom iron lights above are a part of our metalwork as well.  These small details harmonize all components in one architectural unit.
Fabricating and forging iron gates is always a fascinating experience for us, for the reason of knowing that we take an influential part in decorating the fundamental piece of the property.
Get in Touch For an Estimate!

What Our Customers Say
♡

I personally know Alexander for over 10 years.
His guys Installed over 1000 ft.² of Deer Valley stone on my Willow Creek country club dream home. They duplicated the stone work from the lobby of St Regis Deer Valley at my request in 2013
The stone work are perfect, Exactly as I was expected. It’s survived last year 5,6 magnitude earthquake, no problem.
Anton, one of Alexander’s craftsman Installed custom Iron railings in my home in 2015 I absolutely love it. It is a One of a kind conversation piece in home!
I’m looking forward for more projects with Alexander soon.

Alexander Clark Enterprises has worked with NCC Builders for well over 20 years and has always done top level masonry and custom metal work. They are creative, talented and diligent. Their ability to interpret what is wanted by our clients and to deliver it as part of the project team with a can do attitude and approach is greatly appreciated by our clients as well as the entire building team.

Working with Alexander Clark was a great experience. They're wonderfully creative, and were able to beautifully translate our ideas into reality. It's a rare treasure to find an ironwork craftsmen like this .

Alex and I worked together on a project that was highly detailed and very specific to client style. His logistical advice and attention to even the smallest features ensured our outcome was successful. I appreciated all the time and effort he put into the project as we could not have been a complete team without him!

Great job on our Colony job not only in stone but steel work as well.

I love working with Alexander Clark Enterprises. Their ironwork is incredible.

Alexander has organized the stonework for two houses I have built and has always done a topnotch job. I would hire him again in a heartbeat!

​Alexander and his craftsmen was professional, kind, courteous, clean and amazing to work with. They created the perfect crown jewel for our new kitchen. I'm hoping to use him in the future for our driveway gates and masonry work by our pool.

Alexander Clark Enterprises is a highly skilled and creative metal fabrication and blacksmithing company. It was a pleasure working alongside a professional team of craftsman who were open to innovative design ideas and slight modification during the fabrication process! Huge thanks to the guys for the collaborative approach to work and attention to detail while fabricating my custom iron gates.